The Comic Opera revolution | From Opera Seria to modern opera

At the beginning of the eighteenth century starts to develop a type of opera uniquely based on comic characters. It was a consequence of Zeno’s reform which separated the comic scenes within an opera, from all the rest.

Two types of performances started then to take shape, marking a turning point in the history of opera. They were the interludes or intermezzi and a music comedy in Neapolitan dialect, called Commedeja pee Mmuseca. 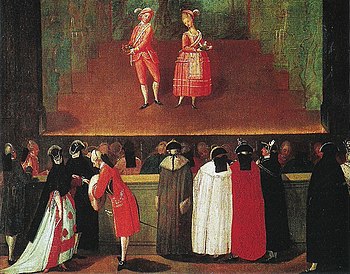 In the baroque opera arias created a complete stop of the stage action. In the intermezzi instead also the musical parts like arias incorporate movements, gestures and even the action. In is way were created also more lively and credible characters and well as more effective dialogues.

The intermezzi were performances taking place in the intervals of other musical or recited works. They were generally in two acts with only a few characters since the show needed to be short, cheap and snappy.The comic intermezzi first developed in Venice but found their major success in Naples.

A modern representation of everydays life

The Commedeja pee Mmuseca is a modern representation of everydays life. Character and language are common, the general atmosphere is ordinary and the situations represented are funny, ridiculous and naughty when not even vulgar.

In the opinion of many the commedeja, along with the intermezzo, set a successful example of how opera seria could move towards more realistic characters and plots.

A more realistic use of voices

The intermezzo for instance demanded greater accuracy in linking the texture of the voice to the role as well as an increased vitality of performers on the stage.The action generally revolves around the basso buffo, a bright basso very close to a baritone, prototype of the comic mockingly character.

This more “realistic” use of voices extends to the female roles too. The soprano, a female character, carrying the emotions and passions of the inamorata; and the mezzo-soprano, always impersonating a mature woman or the soprano’s rival.

As for male voices along with the basso also the tenor acquires more realistic traits, turning from the comic or en travesti role into that of the lover, the young and sweet suitor – although very different from the fiery characters and vocal virtuosity of romantic tenors.

The opposition between male and female voices, which in the nineteen century opera revolves around the contrasting characters of soprano and baritone, is perhaps the most significant inheritance from comic to romantic opera.