For a long time, Monteverdi’s operas had been regarded essentially for their historical importance.

Things are now changing and in 2015 some of the world most popular opera houses, such as Teatro alla Scala, Theatre an der Wien, Royal Opera House London and Oper Frankfurt have produced new stagings of Monteverdi’s operas, in particular of L’incoronazione which is generally considered Monteverdi’s most important opera.

L’incoronazione is an elegant and tasteful display of catchy, elegant melodies and of tragic and romantic elements mixed with at least two totally new element: comic scenes and realistic characters.

L’Incoronazione di Poppea is also the first known opera based on an historical subject. Before librettos were always based over mythology. The libretto for L’Incoronazione was instead mainly drawn from the roman historians Tacitus and has its leading character in Poppea, the beautiful mistress who became wife to the Roman Emperor Nero.

The libretto was provided by Giovanni Francesco Busenello, a Venetian lawyer, member of several literary and some secret academies, author of poems and librettos for Monteverdi as well as Francesco Cavalli. 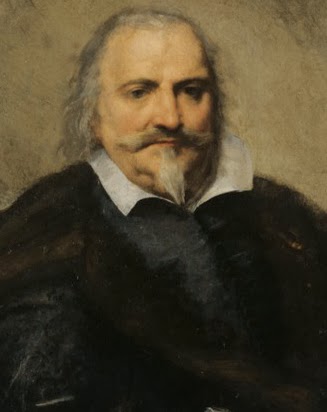 One libretto to fit many purposes

Busenello’s libretto gave Monteverdi the opportunity to describe different passions, psychological and emotional nuances and to make use of his new techniques and musical expressive tools, by providing plenty of different character and situations.

On the other end, that story of Poppea and Nero fitted also Busenello’s purpose, which probably was that of spreading anti-monarchical and anti-court ideals. This would be suggested by the striking contrast, highlited in the text, between Rome, the imperial city of intrigues, ambition and greed led by the tyrant Nero and Venice, realization of Republican ideals. A further indication is also the use of a real story with real characters, to which Busenello only made a few changes for dramatic purposes.

Along with Poppea, the main character of the opera is the Roman Emperor Nero, one of the most loved and, at the same time, hated emperor of the ancient Rome. 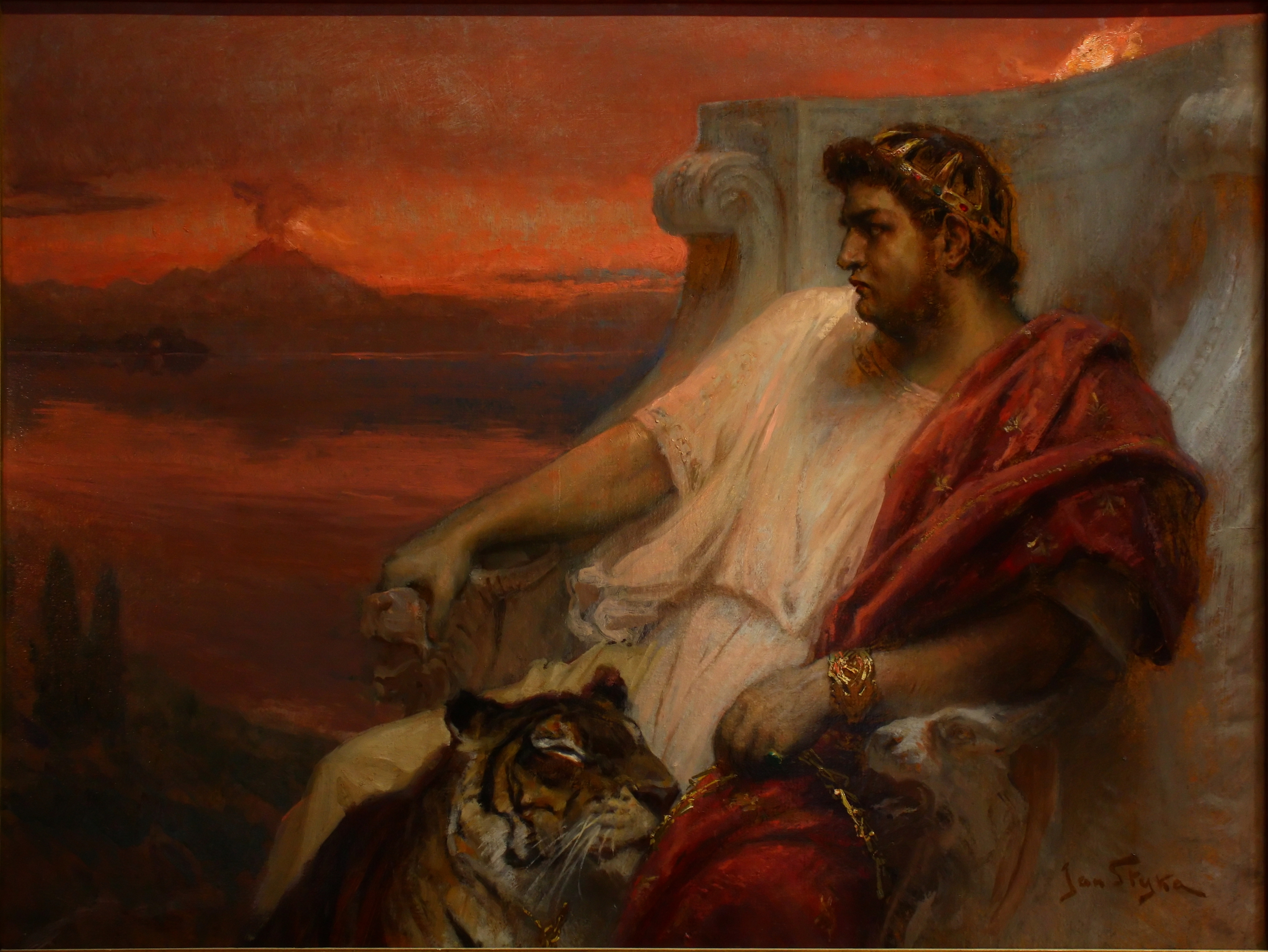 Nero, the emperor who burned Rome down

Only a few sources describe Nero in a positive way, as a lover of beauty and art and a reformer of taxation and monetary system to the advantage of the common people.

Nero is mostly known, through the testimony of Tacitus and Svetonius, as the emperor who burned Rome down in 64ad and a fierce persecutor of the early Christians.

Born in Anzio in 37ad Nero was the son of Caligola and nephew of the Emperor Claudio. Claudio chose him as his successor and therefore he was the last emperor of the Julio-Claudian dynasty.

The first scandal of Nero’s reign was the marriage with his cousin Claudia Ottavia, Claudio’s daughter. He later divorced her to marry Poppea Sabina. Nero was deposed by the Senate following a praetorian rising and died suicidal in 68ad. Poppea probably died during the Vesuvio eruption in 79 ad.

The most infamous event of Nero’s life is the Great Fire of Rome. In 9 days the city was almost completely destroyed. People witnessed they saw his servants starting the fire, but Nero accused the Christians instead. 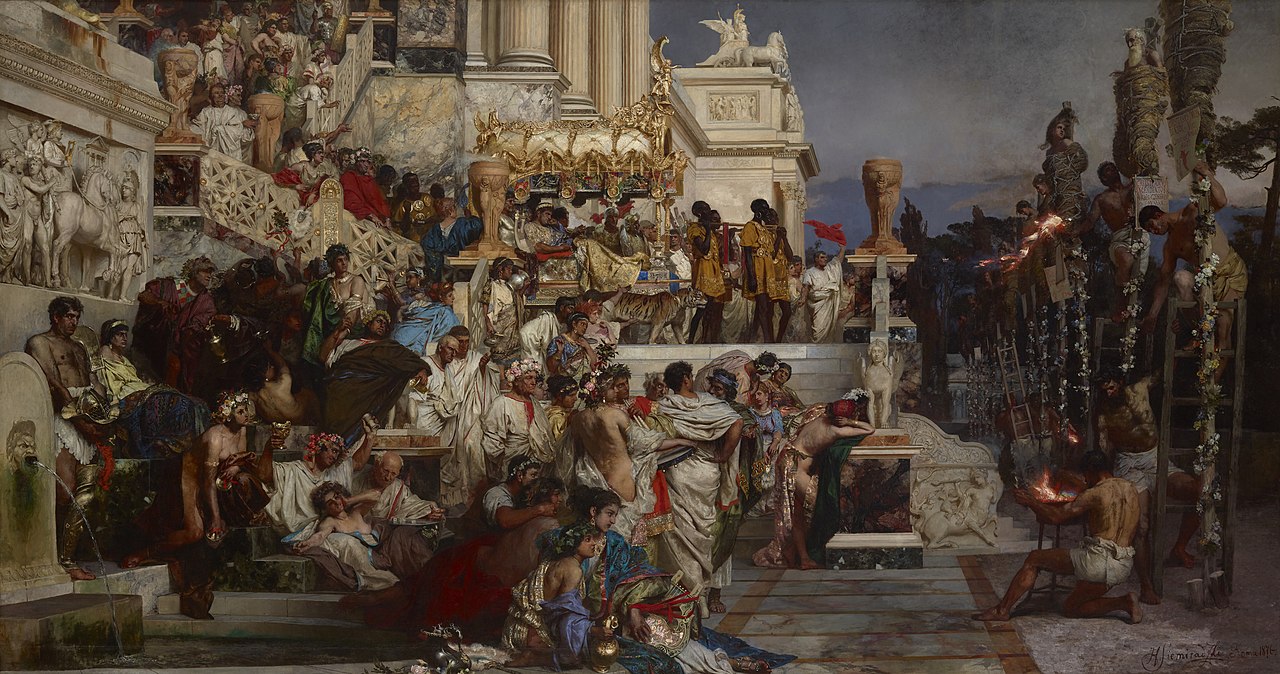 This painting by Henryk Siemiradzki titled “The torches of Nero” shows the persecutions against Christians, many of whom were burned alive like torches.

The most lavish and vast villa of the ancient Rome, the Domus Aurea

As a matter of fact, having so much space suddenly available in the city centre, gave Nero the opportunity to build right on the Colle Oppio the most lavish and vast villa of the ancient Rome, the Domus Aurea.

Lined up, on a front about 400 meters long and around a main octagonal hall, were more than 150 rooms – some over 10 mt high – mostly covered by precious marble, gold leaf, gems and other precious stones as well as stucco and frescoes of incomparable beauty.

Only fragments now remain of the frescoes, made by the artist Fabullo in the so-called fourth Pompeian style, which then covered the walls of corridors and transit areas, with their elegant design and incredible colors.

The electrifying revelation of the ancient Rome

After Nero’s death, the land of the Domus Aurea returned to the Roman people: On the site were built the Baths of Trajan and the Temple of Venus. Vespasian used the outside space for the Flavian Amphitheatre. In just a decade the Golden House was stripped out and completely forgotten, buried beneath new constructions.

Luckily though the soil worked as the volcanic ash in Pompeii and preserved the frescoes from the moisture, until the palace was rediscovered at the end of the fifteenth century by someone who accidentally fell into a slot on the Aventine hillside.

That’s how in the Renaissance the newly re-discovered style acquired in the name of grottesche from the Italian word grotta, cave. When Pinturicchio, Raphael and Michelangelo crawled underground to see them, they must have had the electrifying revelation of what the ancient Rome was really like.