When the diva is a mezzo

Romantic opera brought at the centre of the stage sopranos, heroines of every love drama composed by Bellini to Donizetti to Puccini passing through Verdi.

Mezzo-sopranos in those days played somehow the part of “Cinderella”, before the meeting with the fairy Godmother. Relegated mostly to a secondary role, they were seldom able to share the popularity and admiration granted to the leading sopranos of their time.

Ebe Stignani, one of the most beautiful voices of the last century

Take for example Ebe Stignani. Not many know her or who she was, yet she was one of the most beautiful voices and of the finest musicians of the last century.

Stignani was a main star at the Teatro Alla Scala while Maria Callas was just starting her cooperation with the Milan stage. Those were Callas’ difficult first years at La Scala, where she debuted in 1950 as a replacement to Renata Tebaldi in Aida. There was certainly a pre-established criticism if not hostility and even a lack of interest for Callas’ vocal talents, that kept growing till 1953 when, after a Norma with Stignani, the Greek soprano left Italy to return to the US.

Rumour has it that the young Maria would have been interested in getting lessons from the already famous Stignani, who had an impeccable technique. However, due to some frictions between the two singers on the stage – some argue it could have been Callas tendency to be the only protagonist on the stage – the lessons never happened.

A voice of extraordinary quality, great volume and extension

Ebe Stignani at the time was a leading singer at the Teatro la Scala. Equipped with a voice of extraordinary quality, great volume and extension, she was performing also in roles written for contralto and dramatic soprano, supported by a sound technique and a solid musical education – she was a pianist.

From the 1930s to 1956 she constantly performed at La Scala in various main roles including Eboli, Adalgisa, Laura, Azucena, Leonora and took part in the opening of at least 20 opera seasons.

Stignani: from Naples to the world 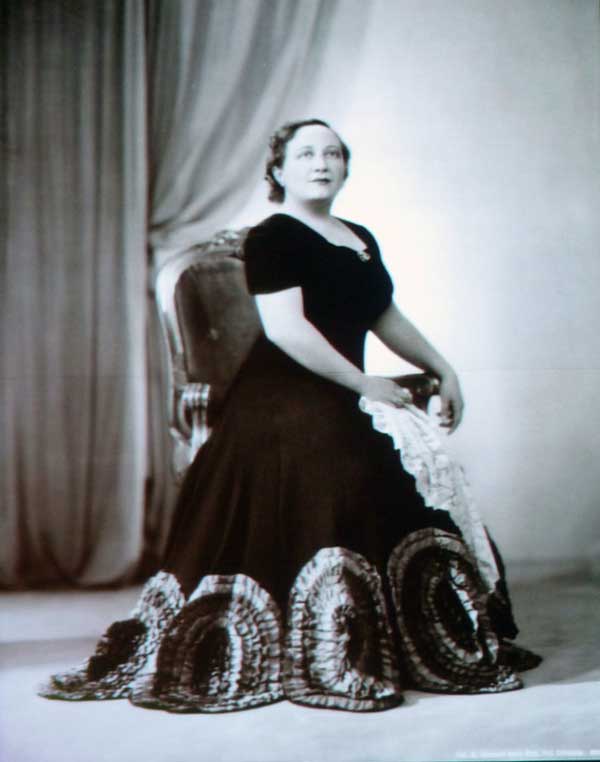 Stignani enrolled at the Conservatorio San Pietro a Majella in 1916, aged 13, and graduated there in 1923 in piano and composition. In 1925, 22 years old, she made her debut at the prestigious San Carlo Theater in Naples.

That was the start of an incredible international career, which brought the young Ebe to many theatres of South America (especially Argentina and Chile) and made of her one of the most sought-after mezzo-sopranos of her time. 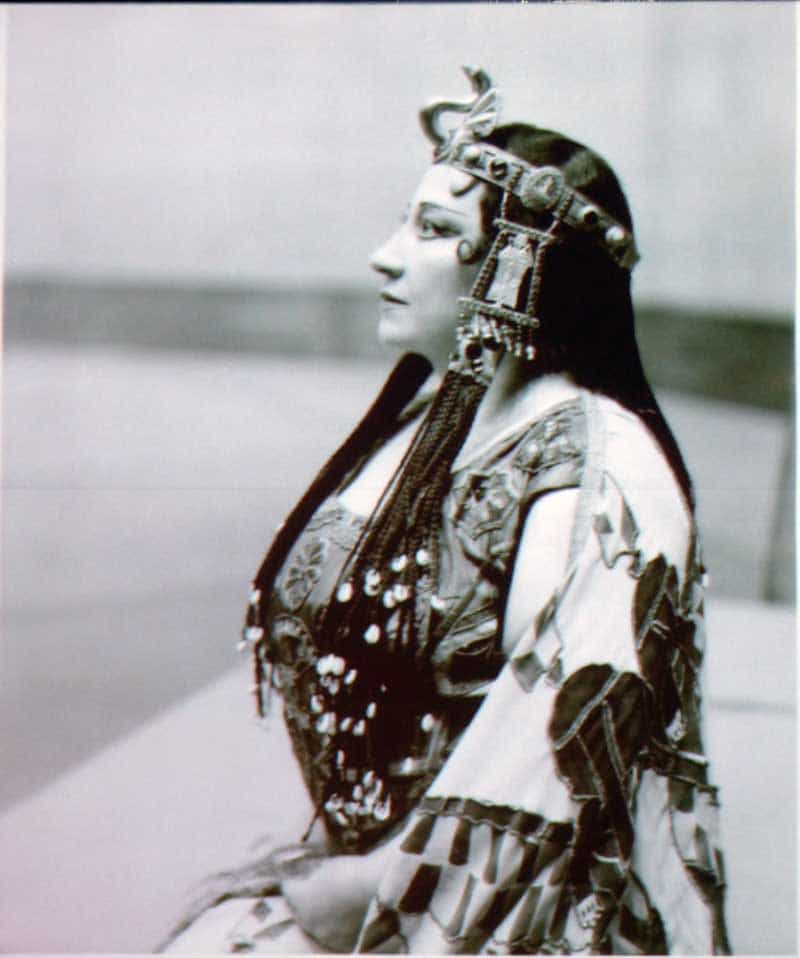 Stignani was born in Naples but her parents were both originally from Bagnacavallo in Romagna. She never forgot her roots in Romagna and in 1935 settled in Imola, where she got married in 1941. She retired from the stage in 1958 and died in 1974. The theatre in Imola is now named after her. 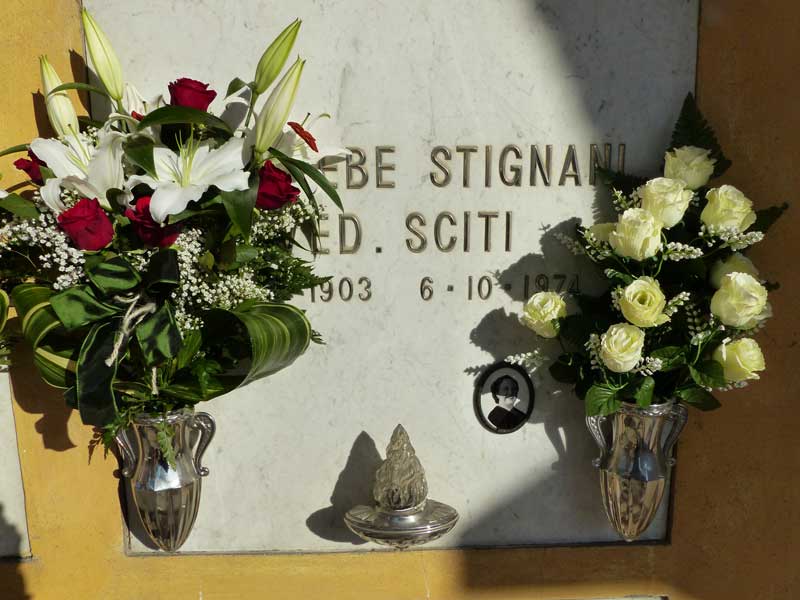 Bagnacavallo claims a strong bond with the diva, confirmed by her choice of the city cemetery as her final resting place. That bond has been revived recently during a concert organised at the theatre Goldoni by the local pro-loco – an entity devoted to the promotion of the area – to mark its 50th anniversary with the municipality of Bagnacavallo and attended by another great Neapolitan: conductor Riccardo Muti.

Conductor Riccardo Muti, at the end of the concert, organised in Bagnacavallo to pay tribute to Ebe Stignani

The concert was organised by Giuseppe Montanari, for many years stage director of conductor Gavazzeni in Florence and subsequently of Muti at La Scala and presented by soprano Wilma Vernocchi.

Performed by two Italian rising mezzos, Daniela Pini and Anna Maria Chiuri, Stignani’s main repertoire was brought back to life, while an endless series of images of the many roles and moments of her wonderful career were projected on the stage.

The concert provided a wonderful opportunity for a delightful visit to the town of Bagnacavallo.

In Bagnacavallo, at the heart of Romagna

Located at the very heart of Romagna – the southern part of the Emilia-Romagna region – Bagnacavallo is the perfect place to experience a relaxing, more personal journey through the real soul of this part of central Italy. With a lot to do and see, including the magnificent Ravenna, Forlimpopoli, centre of Italian cookery, Imola and Faenza major centres for ceramics and pottery, this place won’t certainly disappoint any visitor. 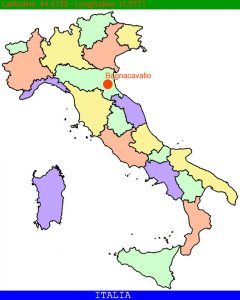 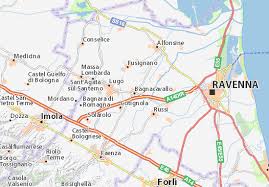 The main feature of Bagnacavallo city centre is the XIII century Civic Tower, 35 meters high, where the bandit Stefano Pelloni known as “Il Passatore” was imprisoned in 1849. 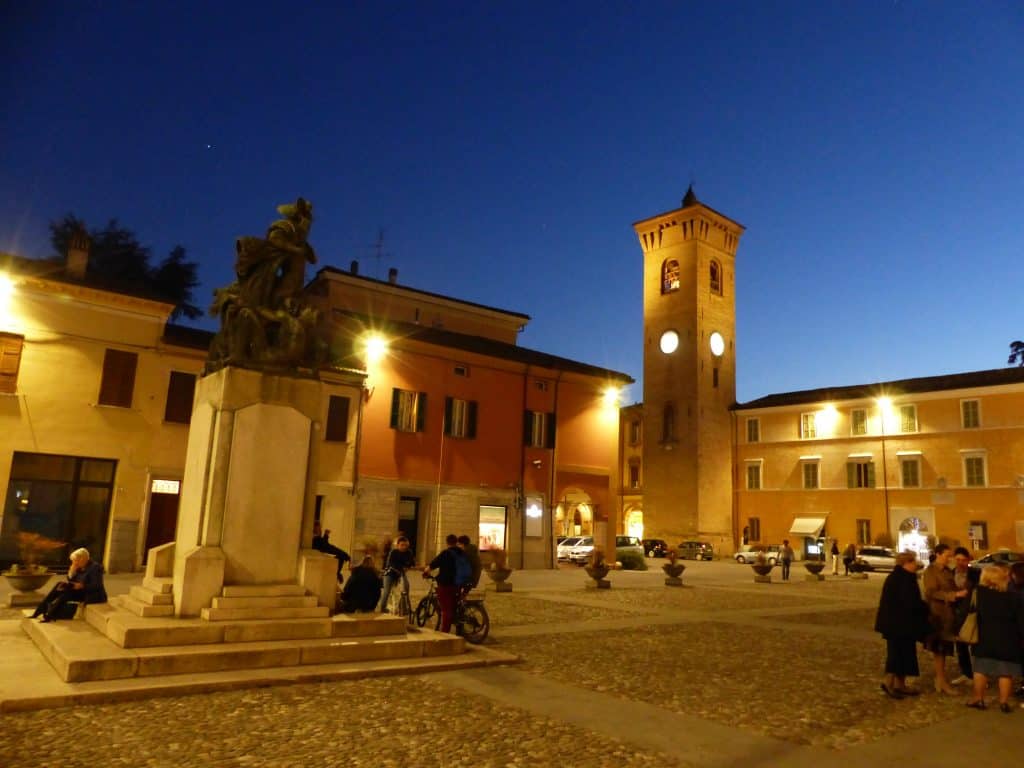 Bagnacavallo, the square with the XIII “Civic Tower”

Pelloni, born nearby Bagnacavallo in 1824, is considered the most wretched among the brigands active in Romagna.

His famous strategy was the almost military occupation of entire towns, where he would search the homes of the richest and torture them to reveal the money and jewel cache. In Romagna he’s almost a star, he’s myth has grown to embody what is now considered a local version of Robin Hood.

One of the more extravagant of his robbery took actually place in a theatre on the night of January 25, 1851.

Arriving in Forlimpopoli Il Passatore and his fellow brigands entered the theatre during the interval, came out on the stage from the closed curtains and punched their weapons against the spectators.

Among the robbed families was also that of Pellegrino Artusi, the “father of Italian cooking” whose sister Gertrude was raped that night, losing her mind from shock.

Another highlight of Bagnacavallo is the delightful Piazza Nuova, a loggia style building on an elliptical plan, built in 1758 and now completely refurbished, which is the first example in the area of a structure built for commercial purposes.

Piazza Nuova in Bagnacavallo. Built in 1758, it’s the first example in the area of a structure built for commercial purposes.

Piazza Nuova is a perfect place to enjoy local delicacies and wines and a lively ambience day and night.

Don’t forget to ask for the Burson, an ancient variety of grape typical of the area. It’s a wine of a deep ruby red colour with a dry full-bodied taste that bears the scents of the Ravenna pine-woods. It’s supposed to be an unbeatable match for game and red meats, as well as mature cheese.

The true gem of Bagnacavallo is, however, the Basilica of San Pietro in Sylvis. Built around 650 AC, probably over another building – possibly a pagan temple – in early Romanesque style, it’s one of the oldest, most beautiful and better preserved of the whole region. 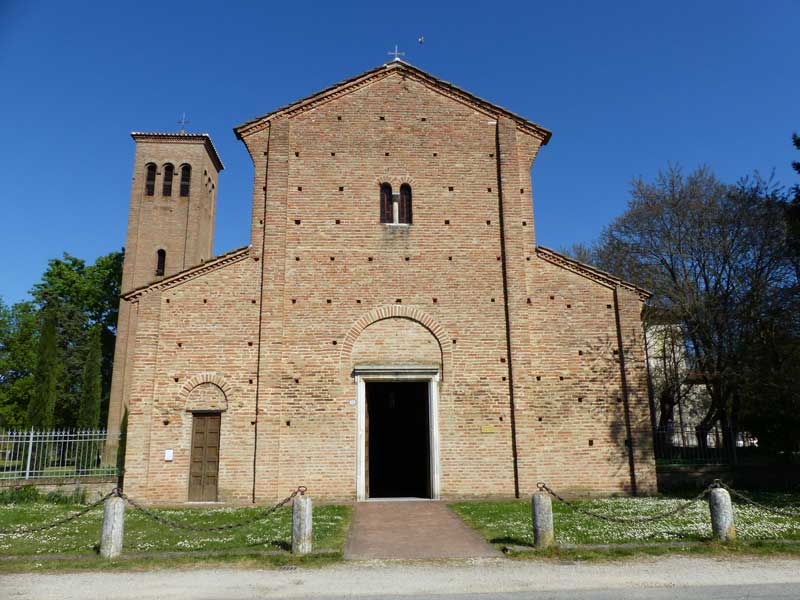 Anna, a lovely lady who was born and lived all her life in a house located 800 meters from the church, tells me in details the history of the building, with a remarkable pride, enthusiasm and love for a place that has witnessed not only her whole life but many more.

An ancient church is always a sign of history not only religious but also cultural and artistic. This pieve which retains its solemn and harmonious beauty was at the centre of an area archaeologists confirm was already inhabited centuries before the Christians.

With the fall of the Roman Empire and the barbarian invasions, forests grow back over the Roman settlements.

A basilica “in the woods“

In the times of the struggles between Byzantines and Lombards, a few decades after Pope Gregory Magno the church was erected in sylvis which literally means “in the woods” around the year 650, at a crossing point between the roads which brought Christianity to every corner of the Italian peninsula.

The building, over 32 meters long and a 15 width could hold more than 1300 people. The façade is solemn and simple while inside the discreet light gives a meditative atmosphere and harmony to the space, divided into three aisles.

Under the altar, the crypt, probably built around the year 1000 for the preservation of relics, accessible by two openings at either side of the presbytery. 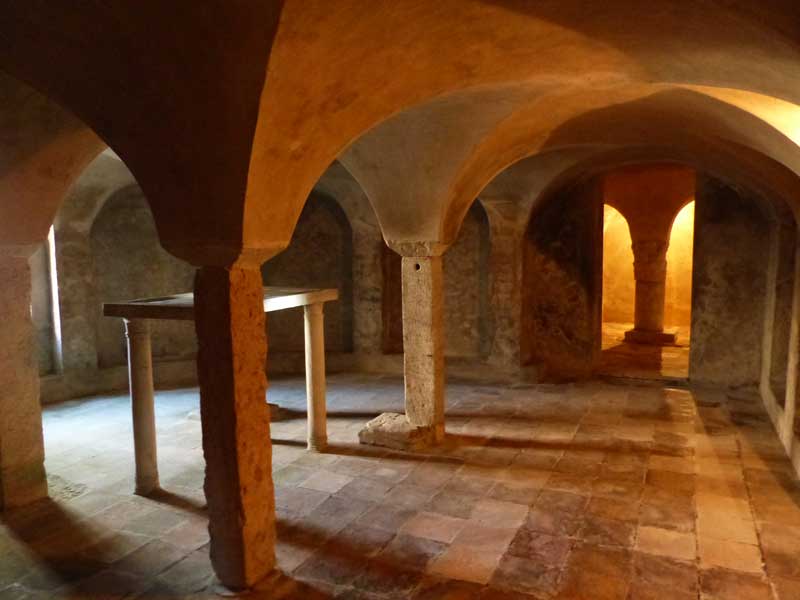 At the centre of the altar a magnificent early Christian sculpture, a large carved marble block, perhaps initially used as an altar. 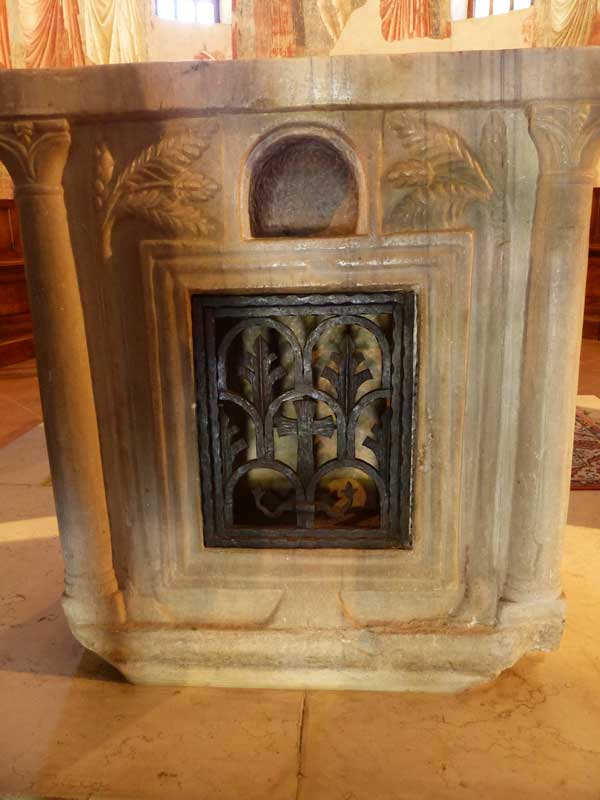 A large block of carved marble, probably used for reliques or as an altar, exquisite example of early Christian art

The marvellous frescoes by the Riminese school, influenced by Giotto

The marvellous frescoes, completed around 1320, are one of the focal point of this church, probably a work of Pietro da Rimini of the great Riminese school, influenced by Giotto.

In the centre Christ Pantocrator and Redeemer, sitting on the throne, blessing with the heads and symbols of the evangelists on his right and left.

The apostles in the early 1300 frescoes probably made by Pietro da Rimini of the great Riminese school, influenced by Giotto

In the lower part of the fresco the crucifixion, with an image of the Madonna charged with pain but solemn and composed and the apostles at both sides.

Crucifixion by the Riminese school

The acoustic of the church is simply perfect, an irresistible invitation for a musician. Who knows if Ebe Stignani ever sang here? If she did we would have certainly loved to hear her!