Zandonai’s Francesca da Rimini tells of the tragic love story between Paolo and Francesca, told by Dante Alighieri in the 5th Canto of his Inferno, first part to the XIV century poem The Divine Comedy. 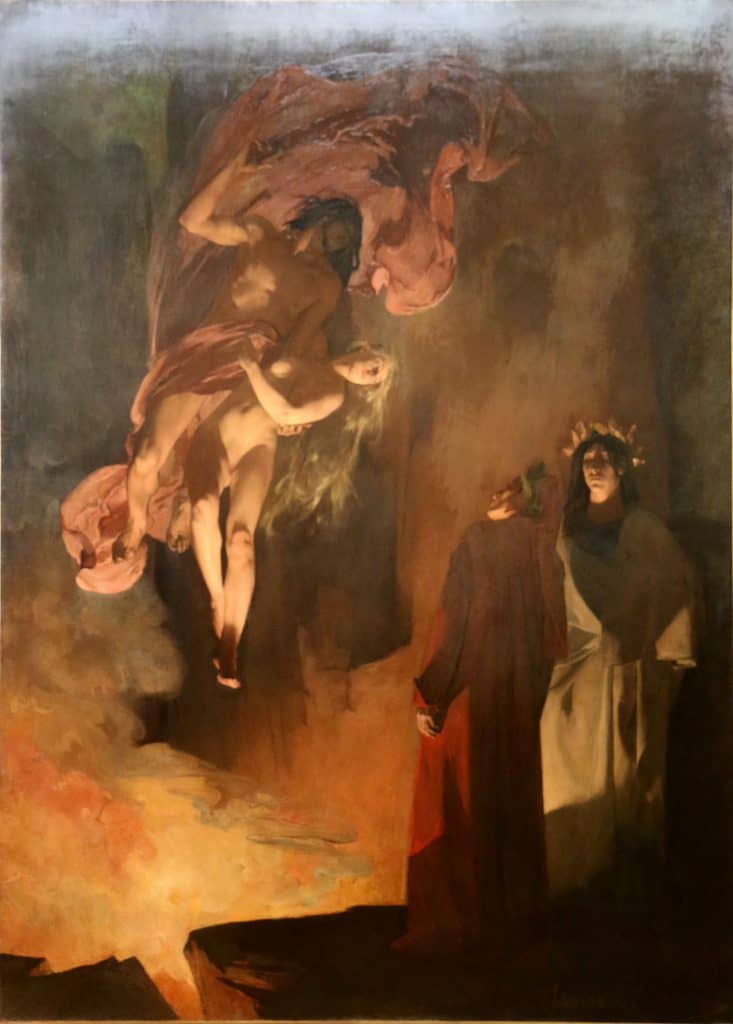 Nearly 100 years later Boccaccio retold the story in his commentary on Dante’s Divine Comedy, adding details which are still historically controversial. In his account Malatesta from Verucchio, founder of the powerful Malatesta family, decided the marriage of his crippled son Gianciotto Malatesta to Francesca Da Polenta to put an end to the war between the two families. According to Boccaccio, Malatesta the Old, concerned that the bride could reject the bridegroom on the altar, sent in his place to perform a proxy marriage his handsome brother Paolo, a trick that she’d uncover only upon her arrival in Rimini.

Gabriele D’Annunzio based the libretto for Zandonai’s opera on Boccaccio’s tale. 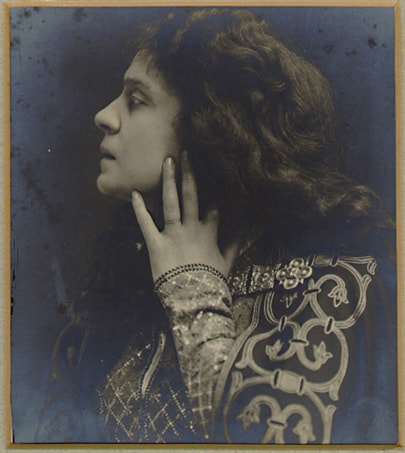 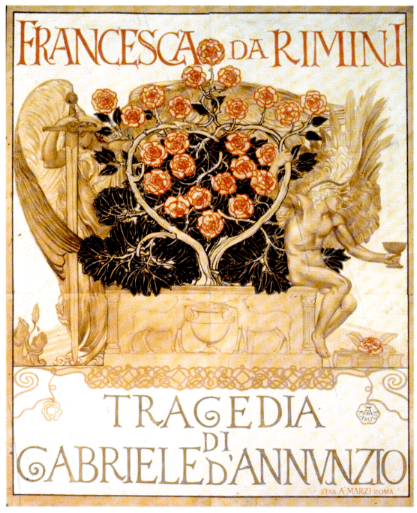 His intention was to make of Zandonai’s Francesca da Rimini, (1902) the first of a series of dramatic works and the foundation to “the new Italian art”.

D’Annunzio’s importance as a writer in the early-twentieth-century Italy was matched only by the prominence of his blatant, extravagant personality, his debts and his scandalous lifestyle, which left a trail of abandoned mistresses and deceived husbands across Italy.

Music had been a powerful force in D’annunzio’s life since his early years. Fascinated by the art of Chopin, Beethoven and Schumann, he used to spend hours listening to their compositions. He was in some ways a composer manqué and that’s probably among the reasons why music was at the core of his work.

He converted to Wagnerisms through Tristan und Isolde, an opera for which he had a true obsession. He loved the prelude and the death of Isolde in particular. By 1897 however his growing political and cultural nationalism, with its “glorification of the Mediterranean cultures”, made him discover the earlier generations of Italian composers such as Palestrina, Monteverdi, Benedetto Marcello and started his attempt to shape a new art based on Italian myth expressed in a “Wagnerian way”.

And so comes Francesca.

The libretto owes much of its effectiveness to Tito Ricordi’s contribution. Ricordi’s extensive cuts turned D’Annunzio’s play into one of the finest libretto of the period, a drama in which each act not only moves inexorably to its own dramatic climax but also contributes to the effect of the work as a whole.

The opera that Zandonai crafted from the libretto is a work of dazzling, dazzling orchestral color. Through those colors the composer captures the essence of moments such as Francesca and Paolo first encounter, the grim bloodiness of the battle, Francesca mixed feelings as she waits for Paolo in her room.

The orchestra creates the athmosphere with an intensity and a richness rarerly heard in Italian opera before and with a power of evocation able to express in sound not only the most tenuous nuanches of feeling but the very core of them.

Riccardo Zandonai was indeed one of the last Italian operatic master craftsmen. After him, although many Italian composers continued to write operas none will show the same consistent dedication or would produce such an impressive body of works.

His subsequent works include “Romeo and Juliet” (1921), “The Knights of Ekebù” (1923), “Julian” (1928), “A Game” (1933)  “The farce of love” (1933), and contain many fresh and inventive pages. Zandonai was also a sensitive conductor, composer of symphonic and chamber music as well as sacred music. Since 1940, he covered the position of director of the Conservatory of Pesaro and died in this city in 1944. Over a carreer of some forty years Zandonai composed a total of thirteen operas, the last of which Il Bacio, The Kiss, was left unfinished and performed after his death. Whilst many of his operas are valuable, Francesca is the only one to hold a modest position in the contemporary repertory.

Zandonai was born in 1883 in Sacco, a small village along the Adige river close to Rovereto. Along with his teacher Mascagni, he was one of the few composers of his time coming from the “working class”. His father was a cobbler and his mother a labourer in the tobacco factory that provided the livelihood for most of the residents of the town. He was the only child and became used to strict discipline and hard work from an early age.

Despite the circumstances of his childood his path into the musical world was a smooth one. His talent became soon known and he found the encouragment and financial support of Rovereto’s wealthy class. In 1898, aged 15, he was admitted at the Liceo Musicale in Pesaro where he continued his musical studies with Pietro Mascagni. In 1905, when arrived in Milan, he was taken on by Arrigo Boito and introduced by him to Tito Ricordi, who was than taking over the family business. Ricordi immediately offered him a libretto: an adaptation from Dicken’s tale The Cricket on the Hearth (Il Grillo al Focolare) which he completed by 1907 and was performed for the first time with a modest success in Turin.

Riccardo was only 24 then and considered a very promising new composer already. The success of his following opera Conchita confirmed Tito Ricordi’s conviction that in Zandonai he had found Puccini’s “heir”, as his father before him had found Verdi’s in Puccini. That convinced him to give Zandonai the opportunity to show his ability on a more abitious work. At that time the choice could only fall on D’Annunzio, whose Francesca, was still available mainly because no composer or publisher was able to meet D’Annunzio’s financial demands.

The drama had been first interpreted by Eleonora Duse in 1901 and was, along with La Figlia di Iorio, the most successful of his works for theatre. Zandonai, determined to obtain the rights to Francesca, agreed to relinquish part of his customary advance in order to pay D’Annunzio.

With his gift for melody and his command of the late romantic orchestration, Zandonai was clearly the right men to set to music D’Annunzio’s decadently evocative words. Francesca caught the public’s fancy and was soon heard in opera capitals as London and New York. After the first eleven performances at the Met in 1916 Francesca however will not be staged in NY until 1984.