People wishing to visit Italy can use plane, train, bus, ferry or cruise ship to get there. The most usual way, however, would be taking a flight, often landing in Rome, Milan, Naples or Venice.

Flights fares can vary significantly depending on the season, with high season fares being easily double of low seasons ones. Winter is high season when flying to the north of the country as the Alps are a popular skiing destination. Otherwise, high season will run from June to August everywhere in Italy. Depending on the year, Italian summers can be really hot, which means that spring and autumn, when temperatures are pleasant and weather is generally good (although sometimes changeable) are probably the best periods to visit as well as the cheapest and less crowded.

Italy is a big country so make sure you are flying to a city close to the area of your interest. Almost every Italian region has now an international airport, making it easier for tourists to reach the area they wish to stay in or they want to be the starting point of their journey.

All major airlines fly to Italy from every part of the world as well as connecting all major European cities. At the same time, low-cost airlines ensure some great flight connections between European and Italian cities. Italy has an extensive network of internal flights operated by Alitalia and budget airlines across the country.

The best way to start planning your journey is visiting the airlines’ websites, or try one of the many airfare search engines such as www.skyscanner.com, www.kayak.com,  www.azfly.it or www.momondo.com which are supposed to find the best possible fare on sale at a given moment. In this way, you will get a first idea of the airlines flying to a specific destination and those operating connections flights to your destination.

If you live outside of Italy but you hold an Italian passport, there’s an international nonprofit organization which helps you, under specific conditions, finding Free Flights to Italy. The platform uses the free service Google flights to find the flights eligible for the “Free flights to Italy” program. Membership is free.

Arriving by train or bus from a European city

Train is a great way to enter Italy from within Europe unless you are pushed for time. Same thing if you are looking at traveling by coach.

Arriving and moving around by ferries and hydrofoil

Traveling by ferries and hydrofoil Ferries is another option. Ferry routes connect Italy with Greece, Turkey, Tunisia, Malta, Croatia, Albania, Egypt and Spain. Information on all ferry services in the Mediterranean can be found on www.traghetti.com.

With almost 6.500 km (over 4.000 miles) of coastline, as well as islands and major lakes, Italy has a well-developed network of ferries and hydrofoils operated by a number of different private companies. Large car-ferries connect by overnight ferry or hydrofoil from the mainland major islands of Sardinia and Sicily with the mainland ports of Genoa, Livorno, La Spezia, Civitavecchia and Naples. On the Amalfi Coast, there’s a good service of ferries and hydrofoils running from mainland towns and cities (Naples, Positano, Amalfi, Sorrento) to the islands of Capri, Ischia and Procida. 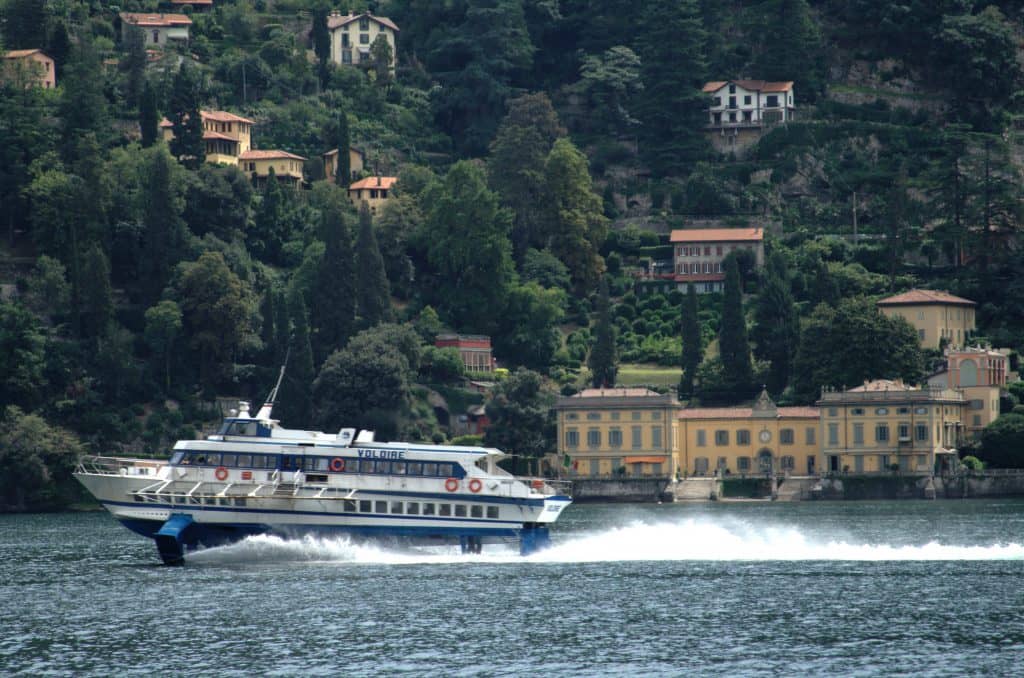 It is advisable to book well in advance to avail of better fares, especially when traveling in summer or when taking a vehicle. The main Italian ports are Ancona, Brindisi , Cagliari , Rome- Civitavecchia , Genoa , Livorno , Naples , Palermo  and Venice . Ferries also operate on the main lakes of Garda, Maggiore, Como, and Iseo and are run by Navigazione Laghi.

Italy is a big and extremely diverse country. Unless you chose a one-base holiday you might want to travel around. Obviously, the option that gives more flexibility is renting a car. Nonetheless, the best option for covering big distances, after internal flights, are trains or buses generally relatively efficient and cheap.

Getting around by train

The Italian train system is one of the best ways and the preferred option for tourists to move around the country as it’s quite reasonable and generally efficient, although not always on time. It operates on a comprehensive network across the country with a number of different types of train, from regional trains stopping at almost every station to high-speed lines connecting all the major cities. NTV (Nuovo Transporto Viaggiatori) also called ItaloTreno, is a privately owned company which connects via brand new high-speed trains the cities of Rome-Milan-Naples- Bologna-Turin- Florence- Venice.

Most of the connections, however, are still covered solely by Trenitalia, the Italian national rail company. Trenitalia also operates high-speed trains such as the super-comfortable 300km/hr Frecciarossa, as well as the Frecciargento and Frecciabianca also capable of high speeds, but currently running on conventional tracks. Fast trains connect only main cities. Seat reservations are required for all of them (even if you hold a rail pass you’ll need to pay a small supplement). Book online well in advance in order to avail of the best fares with sometimes huge savings.

Also, run by Trenitalia are the InterCity (IC) trains – the common long-distance expresses, which call only at larger stations and require seat reservations – and also the cheap Regionale (R) and Regionale Veloce (RV) services – stopping almost at every station. There’s no seat reservation on those trains. Tickets can be bought online or at the train station on the day, in which case they must be stamped before getting on at one of the machines on platforms. Traveling without a ticket (or failing to stamp it) can result in a €50 fine (payable on the spot to the conductor by non-residents).

For Timetables and fares as well as for any other information on services offered by Trenitalia on and off-board, visit the Trenitalia.com website, which has also a journey planner.

Getting around by bus, tram or metro

Cities and towns have generally an efficient urban and suburban bus system. Nearly all places in and outside a city are connected by bus, although in out-of-the-way towns and villages schedules may be quite irregular and drastically reduced – or suspended – at weekends. Bus terminals are often conveniently located next to the train station. In smaller towns and villages, most buses pull in at the central piazza.

City buses are always cheap, usually costing a fare of around €1.20. Tickets are commonly available from newsagents and tobacconists, but also from anywhere displaying a sticker saying “tickets” or “biglietti”. Once on board, you must validate your ticket in the machine at the front or back of the bus. In some cities, it is possible to buy tickets on board.

Big cities such as Rome, Milan, Turin also have a good tram service.

Extensive metro networks exist in Rome, Milan, Naples and Turin smaller ones in Genoa and Catania. Tickets can be purchased from station vending machines or tobacconists. Day passes are also available.

Hiring and travelling by car

If your plan is to visit large cities, you won’t need to rent a car. Moving between cities by train and then use public transport to get from one place to the other within the city will be the easiest option. However, if you wanted to wander off the beaten track or were travelling with a group of people, hiring a car will allow you to see more as well as being convenient and more economic.

Italy has an extensive network of roads, including privately owned motorways, autostrade, connecting from the Alps to Sicily the whole country. They are signaled by green road signs marked by a white ‘A’. Tolls are charged at varying distances and scales. You will need to take a ticket as you enter the motorway and pay on exit. Paying by cash or credit card are the most straightforward options. More information on the Italian motorway network and toll charges are available on Autostrade per L’Italia website.

Alternatively National, Provincial and local roads – i.e. Strade Statali (“S” or “SS” state highways), Strade Provinciali (“SP” or “P” provincial highways), Strade Locali – are free but can be very busy at times and therefore not practical if you were travelling long distances. Traffic can be heavy during rush hours and on bank holiday weekends. For traffic information visit the Automobile Club d’Italia website, which could be very useful also in the event of breakage.

To hire a car there are agencies at every international airport, although it is best to arrange the rental online and in advance. Online booking agency such as Rentalcars.com (www.rentalcars.com) compares the rates of the most popular car-rental companies such as: Auto Europe (www.autoeurope.com), Avis (www.avis.com), Budget (www.budget.com), Europcar (www.europcar.com), Hertz (www.hertz.it),  Italy by Car (www.italybycar.it), Maggiore (www.maggiore.it), Sixt (www.sixt.com). For those who intend to begin and end in different cities, there will be a drop-off charge.

Many cities have established, generally, in the most central areas a Zona Traffico Limitato (ZTL; restricted traffic area) where vehicle access is for residents only or else, such as in Milan and Rome, subject to the payment of a ‘pollution charge’. If your hotel is within one of these areas make sure the reception arranges a provisional transit permit for you.

Parking can also be at times problematic. Although many cities and towns have pay-and-display areas just outside the center, they might be usually full during high season. Most parking spots in city centers have a pay-and-display system, marked by a blue line, with meters or scratch-cards from local tobacconists. The White-zone spaces (white lines) are very much sought after because they are free, but sometimes a short time-limit applies. In that case, it’s handy to have a mini clock-like dial which you set and display in the windscreen, to indicate when you parked and that you’re still within the allowed limit. However, a simple ticket indicating the arrival time will do the job.  Yellow-zone areas (yellow lines) are for disabled drivers or delivery zones. Car parks, usually small, enclosed garages, are generally quite expensive. Parking at night is easier than during the day, but make sure you’re not parked in a street that turns into a market in the morning or you’re likely to be towed.

Renting a motorbike could be an alternative to hiring a car. Mopeds (50cc) and scooters(from 100cc on) are easy to find. Most agencies throughout Italy rent motorbikes, ranging from small Vespas to larger touring bikes. Note that helmets are compulsory.

Cycling is a very popular sport and mode of transport almost everywhere in Italy. In major resorts and larger cities as well as in rural areas it’s usually possible to rent a bike. Bikes can be taken on regional and fast regional trains; on faster trains, bikes must be placed in bike bags. 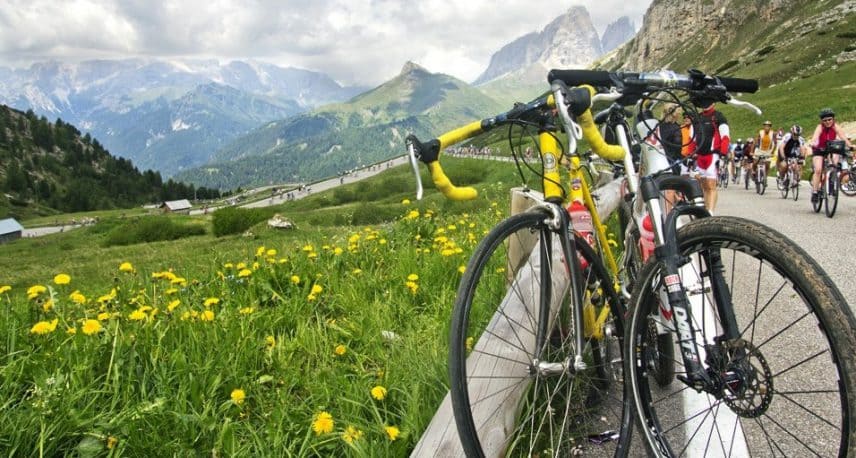 Italians in small towns and villages are welcoming to cyclists, and hotels and hostels will take your bike in overnight for safe keeping. Serious cyclists might consider staying at one of a chain of hotels (Italy Bike Hotels; w italybikehotels.it) which cater specifically to cyclists. Each hotel has a secure room for your bike, a maintenance workshop, overnight laundry facilities, suggested itineraries and group tour possibilities, a doctor on hand and even dietary consultation service.