Getting closer the deadline for the presentation of a new opera at the Teatro Carcano in Milan Vincenzo Bellini and his librettist Felice Romani after considering Hugo’s drama Ernani, changed their mind and embarked instead in the fairy-tale romance La Sonnambula.

The story, set in a pastoral ambience, revolves around the angelic, idealized character of Amina, the archetypal of the slandered innocent, which finds previous examples in Rossini’s Desdemona and Donizetti’s Anna Bolena.

This opera is organized in a rather traditional way, that brings back to the memory the enchanted atmosphere of old operas such as Paisiello’s Nina Pazza per Amore, in which music marks the difference between action and lyrical parts.

The vocal parts in particular are written as if they happens in a suspended time and outside the action. It is in this sense that Bellini has been defined as the greatest last heir of the 18th century Neapolitan tradition.

La Sonnambula was a complete triumph, since its premiere. The newspapers wrote of “a melody that goes to the heart” and of “instrumentation always beautiful and well built” and reported of “endless applauses“. 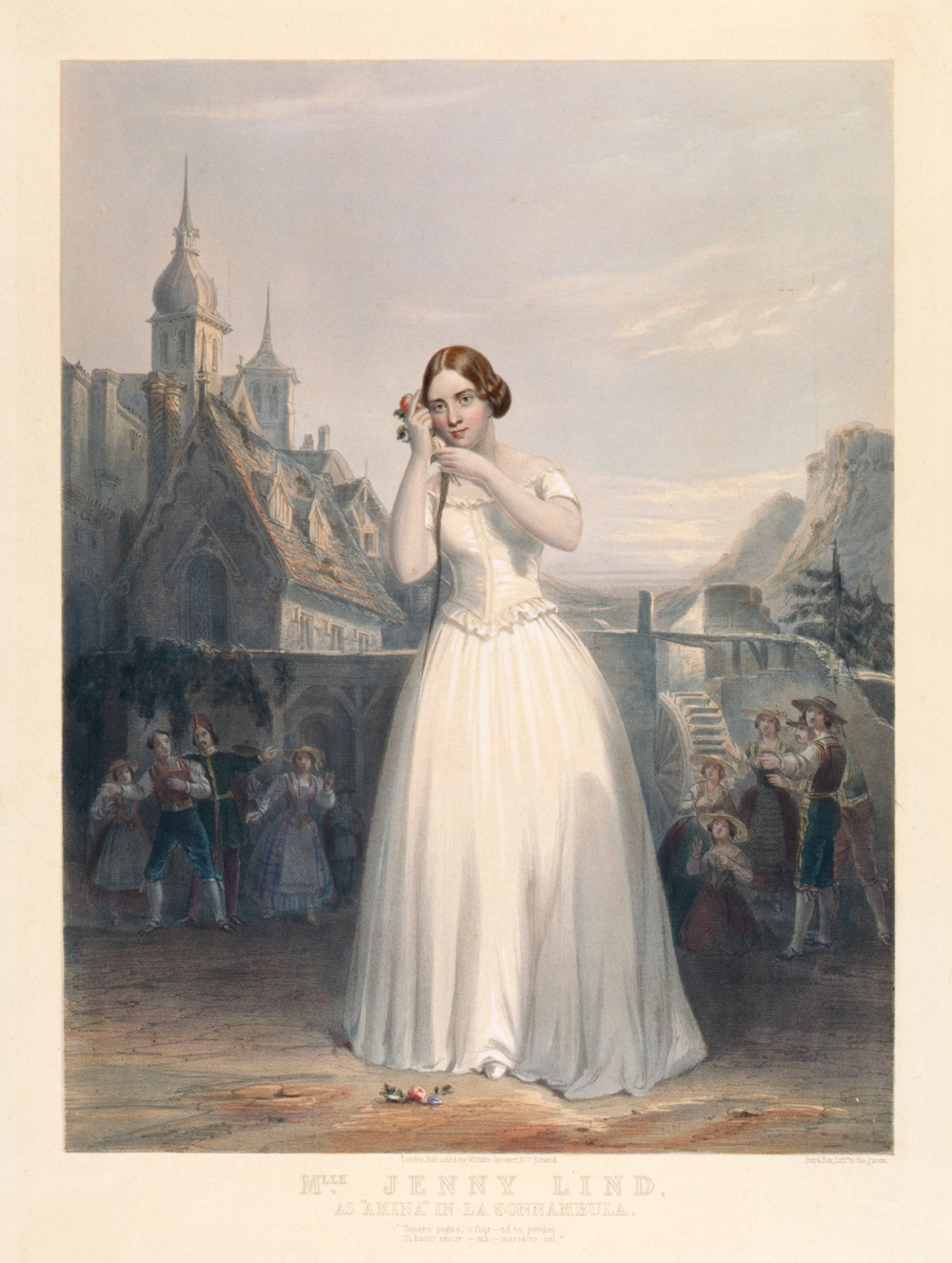 Shortly before the wedding Amina is found asleep by her fiancé Elvino in Count Rodolfo’s hotel room and therefore accused of infidelity. The situation is resolved with the discovery that she’s affected by sleepwalking. The theatrical trick of the sleepwalking wasn’t new and other composers before Bellini, such as Piccinni and, later, Verdi – Lady Macbeth’s sleepwalking scene –  as well as Donizetti – Lucia’s and Linda’s madness scenes can be referred to the same situation – used it.

In a Swiss mountain village the people gather to celebrate the wedding of Amina, an orphan raised by Teresa, to Elvino, a young landowner. Everyone’s happy, except Lisa, the innkeeper, who loves Elvino and doesn’t want to lose him.

Amina enters and the notary also arrive together with Elvino, who presents the wedding ring, the one that was already his mother’s. Count Rodolfo arrives in town and as it’s turning dark everybody leaves for fear of a ghost that is believed to haunt the village. The count takes gallantly his leave from Amina, stirring Elvino’s jealousy.

Later on at the inn, Lisa is flirting with the count, which appears to appreciate female’s beauty, when a noise coming from the outside interrupts them. Lisa doesn’t want to be found in the count’s room and she flees leaving behind her handkerchief.

Amina enters the room through the window, walking in her sleep. The count realizes she was mistaken by the villagers for a ghost. He doesn’t want to wake her up so he leaves her alone in his room.

Lisa, discovering Amina in the count’s room, summones all the peasants of the village there, so that everyone can catch Amina in that equivocal situation.

Elvino takes back the engagement ring from Amina and is determined to marry Lisa instead. But the count arrives to proclaim Amina’s innocence, explaining that she’s a sleepwalker. In that way the faith is reestabilished and the lovers reunited.

The full opera: a recent staging of the Teatro dell’opera di Firenze with Italian soprano Eva Mei and the historical staging at La Scala in 1955 with Maria Callas at her best in the title role.