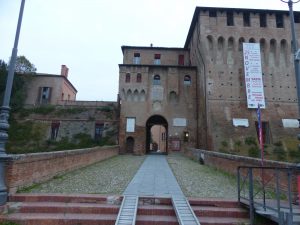 It is known that every Italian region is different from the other. Different location, morphology, history translated into a wide range of traditions, dialect, attitude… wine and cookery!

For those tourists who decide to live a more authentic and original experience of Italy, that diversity is still a wonderful surprise and an element of interests and attraction.

Romagna, The southern part of the Region Emilia Romagna, makes no exception. It has certainly plenty to intrigue and interest the more demanding traveler.

Right in the middle of it the town of Lugo could serve as a perfect base for exploring an area that goes from the splendid city of Ravenna with its 8 (yes, 8!) Unesco sites, Imola and Faenza, world capitals of pottery, Fusignano hometown to violinist and composer Arcangelo Corelli – one of the most important of the baroque period – only a few kilometres from Bologna, City of Music Unesco.

Yet, Lugo itself has more than enough to attract people with an interest (not only) for music, starting from the places linked to Gioachino Rossini’s early years.

The young Rossini and Lugo

Gioachino Rossini spent in Lugo the years from 1802 to 1804. Many are the traces in town: the Rossini’s family home, located in via Rocca 14 – owned by his grandfather Giacomo and passed to Gioachino in 1839, which he particularly loved; the house in Via Manfredi 25 where Gioachino lived with his family; the organs Gatti (1750) and Callido (1797) on which Rossini used to practice and also some of the original manuscripts of his early composition, such as the famous Sonate a Quattro, composed in 1804.

The house in Via Rocca, recently restored, has on the façade a plaque celebrating the young maestro. Now it hosts an exhibition of visual art. 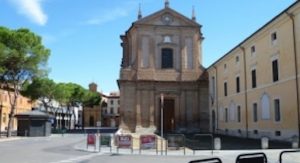 Lugo, The Church of the Carmine which has a wonderful organ made by Gaetano Callido in 1797

In the Carmine church, rebuilt by the architect Francesco Petrocchi in a Baroque style on an older church, can be admired the famous organ created by Gaetano Antonio Callido in 1797, considered one of the best over the 430 he created, on which the young Rossini loved to exercise. In more recent times performers such as Gustav Leonhardt played this wonderful instrument, still in perfect conditions.

In Lugo the young Rossini received “the first principles of music and singing” at the Malerbi School, where not only studied singing, composition and harpsichord but also had the opportunity to study on Mozart’s and Haydn scores. 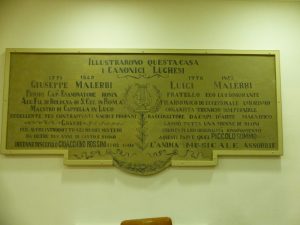 A plaque at the Malerbi villa remembers the most famous among the Malerbi brothers’ pupils, Gioachino Rossini

The Malerbi villa, built in the early nineteenth century, was the country residence of the Malerbi family. Giuseppe (1771-1849) and Luigi (1776-1843) were both musicians and their school had a reputation to be one of the best of Romagna.

Villa Malerbi hosts some of Rossini’s scores while some other are kept at the Biblioteca Trisi a few steps away from the Malerbi Villa, which also features an interesting display of original pictures of famous singers from the beginning of the last century. 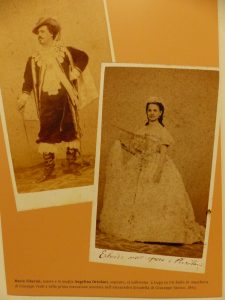 Landmark of the town is the Rocca Estense, the Estense fortress on whose mighty walls grow wildly amazing capers. 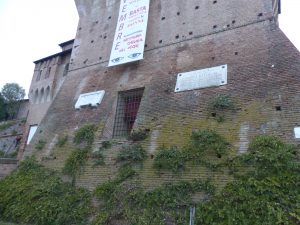 Wild capers growing on the walls of the Estense fortress

From its balcony, as proudly remembered by a plaque Garibaldi himself, leader of the campaigns for the Italian reunification, gave a speech. 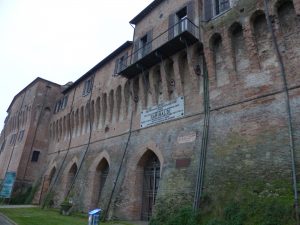 The balcony from which Garibaldi addressed the people of Lugo

Inside the fortress which is now the town all the so-called “Salotto Rossini”. A vast room where can be admired the only existing oil portraits of Rossini’s parents, Anna Guidarini, singer, and Giuseppe Antonio Rossini, born in Lugo 3 October 1758 and married to Anna Guidarini in 1791 – the year before Gioachino’s birth. Both these portraits were donated to the Municipality of Lugo from Olympée Pelissier, Rossini’s second wife.

There’s also a beautiful portrait of Gioachino Rossini made in 1828 by the painter Haudebourt Lescot, donated to the city of Lugo by Rossini himself. 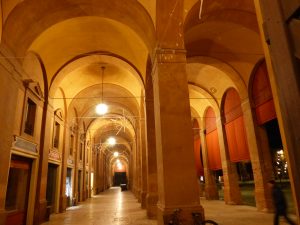 Another gem of the town is the great “Pavaglione” with its many elegant shops. 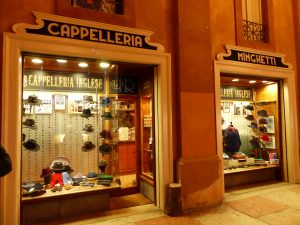 It is the most beautiful and better-preserved example in central Italy of an eighteenth-century quadriportico, which is a series of double arches surrounding an open space. 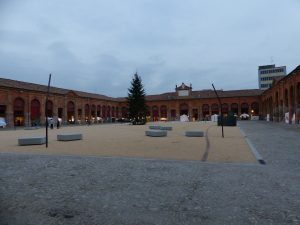 Lugo was from late 1600 the Italian capital of the silk trade and the Pavaglione was exactly the center of that florid market. 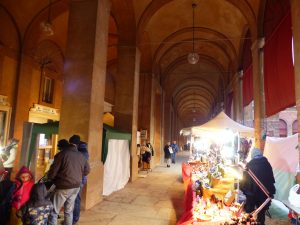 Francesco Baracca and the prancing horse

Between the Estense fortress and the Pavaglione, on one side of the vast and surrealistic square, surrounded by a number of buildings that epitomize almost every architectural style from baroque to rationalism, stands the imposing marble wing 27 meters high, flanked by a massive 6 meters bronze statue, by the sculptor from Faenza Domenico Rambelli (1927- 36). 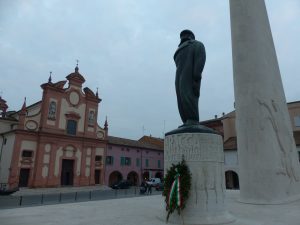 The monument commemorates and celebrates Italy’s top fighter ace of World War I – credited with 34 aerial victories – who was also a talented cellist Francesco Baracca (1888-1918).

Famous is the emblem that he wore side by side on his plane, a black prancing horse. Baracca, who attended one of the most prestigious Italian military schools – the “Piedmont Cavalry” – which crest was a silver prancing horse on a red field, chose to take that coat of arms as a personal emblem, to symbolize both his military training and his love for horses.You will easily recognize it, as it was taken up by Enzo Ferrari for his cars.

“Put my son’s prancing horse on your cars Mr.Ferrari. It will bring you luck.” Baracca’s mother (countess Paolina Biancoli) apparently told Enzo Ferrari during a meeting. Ferrari took the advice, adding to the black prancing horse the canary yellow background, the color of his hometown, Modena. 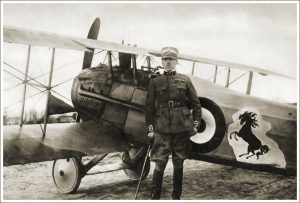 WWI hero Francesco Baracca, portraited beside his plane, showing the prancing horse – the Baracca family crest – on one side.

The town of Lugo has a wonderful museum dedicated to Francesco Baracca. Initially located on the ground floor of the Estense fortress in 1990 was moved to the birth house of aviator.

In the cemetery of the town can also be seen Baracca’s Burial Chapel, decorated by the artist Roberto Sella with a majestic sarcophagus, cast using the bronze of the Austrian cannons from the Kras region.

Although related to the “Generation of the eighty” with composers such as Casella, Malipiero, Pizzetti and Respighi, Pratella was the one who introduced in music the “Noise-art” or “art of noises” – invented by Luigi Russolo.

He wanted music to reflect the modern technology through the use of elements such dissonance, atonality, cacophony. 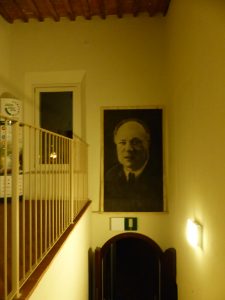 A portrait of Francesco Balilla Pratella inside the Malerbi school, Lugo

The rising popularity of Lugo and its theater

In the town of Lugo, which passed from the papal state to the Este family in the late sixteenth century, the musical tradition was well established along with the trade. Opera performances were organized here, in the fair yard already in 1600.

Such a large number of people coming in town for the fair persuaded the locals to build the first theater in the region (1759-61). A social and cultural focal point for the wealthy town wanting to offer entertainments to its visitors also during the winter season.

The performances organized in Lugo became so popular and well known throughout the region that they were quoted by Benedetto Marcello – in the opera “Il Teatro alla Moda” – and even by Lord Byron –in the IV canto of the poem “Don Juan”.

The oldest theater in the Emilia Romagna region 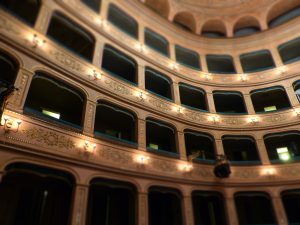 Since then the wonderful 1700 theater, which bears the name of Rossini since 1859, saw the performances of a great number of artists, starting from the fourteen years old Rossini to conductor Toscanini to the great Beniamino Gigli, up to the most recent productions of Baroque operas following the restoration of the theater in 1984.

The refurbishment of the theater “a long and daunting commitment”

“The refurbishment had been at the center of the public debate for a while. Many were insisting for its demolition due to its conditions and the money needed to bring it back to its original splendor. But we stood and fought for it! We couldn’t lose it. The refurbishment was a long and daunting commitment” says Mr. Domenico Randi, former Mayor of the town and now theater Director and vice-president of the Teatro Rossini Foundation. 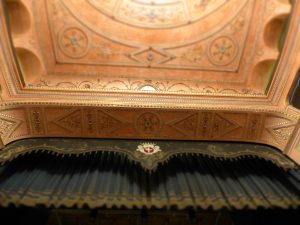 ”Thanks to its shape and the materials used it had a wonderful acoustic, perfect for small ensembles and for the baroque repertoire. The whole theater was an instrument in itself and, as such, it vibrated and sounded in a very peculiar way. We wanted to keep that”. 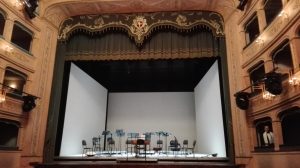 Pierluigi Cervellati was the architect appointed to oversee the refurbishment. “Managing the expectation of the locals wasn’t easy” Mr. Cervellati recalls.

“People were convinced that any new addiction would inevitably corrupt the acoustic of the place. The elderly people of the town used to gather in front of the building site, complaining that they would never hear again the same sound from it – which, by the way, I attributed to their age rather than the quality of our work!” – he laughs  –

“It was true though that any little change to the theater could potentially produce a variation of its original sonority. Yet we wanted to keep it as far as possible. For that reason we mainly used the same materials and techniques used by the craftsmen who had built it over 200 years before, creating what nowadays would be defined “an authentic fake”. 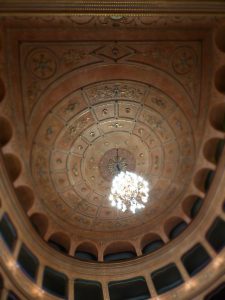 The orchestra can’t hear a thing!

“Those repeated comments made me really anxious about the final outcome of the refurbishments. We couldn’t run a real test so it was only when a real orchestra played in it for the first time that I got a first reaction. “Get here immediately! The orchestra can’t hear a thing! They protest they won’t play in here!” was the first comment I got on the phone from the manager.

My reply was – “Tell the orchestra to learn how to play first. An instrument can only sound if it’s played properly!” – He smiles slyly – “I had to have few statements ready for possible critics, you know!”.

During my life, I had the privilege to refurbished many other theaters after that of Lugo. Yet, I must admit, no one else gave me the same enthusiasm and passion” – Mr. Cervellati ends with visible emotion. 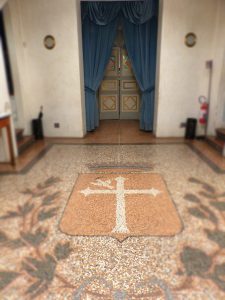 The Rossini theater in Lugo is now leaving a second golden age thanks to the baroque festival Purtimiro, which takes place every year in September / October, providing also an opportunity to visit an area of Italy mostly unknowned but incredibly interesting and welcoming. 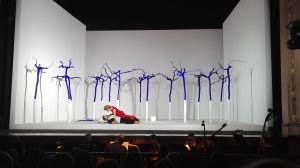