What is Rigoletto it about? This sounds like a simple question, which could be answered by telling the story of the Duke of Mantua, the city of Mantua, his hunchback jester and the jester’s daughter, Gilda.

A story of love, deception, revenge, and death.

The story, of course, is so close to the one told by playwright and poet Victor Hugo in his play Le Roi s’amuse (The King has fun), that they could appear the same thing. 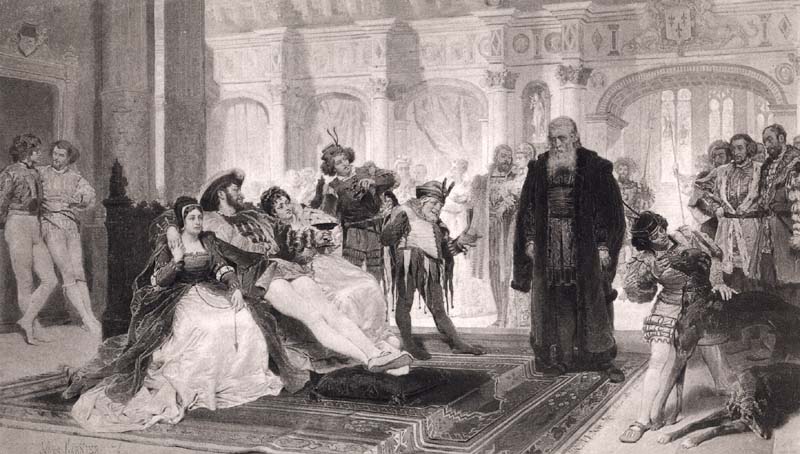 But anyone who loves opera will not be satisfied by this explanation. In the best operas, music is much more than an accompaniment to the story: it is through the power of music that the story unfolds into the drama.

Verdi fell literally in love with Hugo’s play and was determined to translate it into music; despite his librettist Francesco Maria Piave‘s concerns, particularly over the fourth act culminating in the deposition of a dying Gilda in a bag.

In a letter dated June 1850, Verdi explains the reasons he suggested as a title for the opera Monterone’s curse or, by the short, The Curse. “The subject is the curse as a moral element: A distraught father who mourns the honor taken away from his daughter, a court jester who laughs at him and is cursed because of that. I repeat it: the subject is the curse!”.

Both Verdi and Piave knew that a libretto as such could incur in the Venetian censorship – the opera was meant to be staged at the Fenice theatre –  and indeed between October and November 1850, a number of serious issues were pointed out by the censors.

Verdi was able in some cases to suggest himself the changes,  as for the replacement of the French court with an Italian Renaissance court – that of Mantua.  What really mattered to him were the characters and their interaction, so he resolutely resisted other changes that were required.

Beniamino Gigli, one of the best tenors of all times, as Rigoletto in a 1927 movie.

For instance, he insisted that the Duke was a libertine “otherwise, Rigoletto’s anxiety when he realizes that his daughter is hidden in the palace wouldn’t make any dramatic sense”. Verdi also insisted on keeping the bag, asserting that it wasn’t conceivable to finish the opera in nothing, after all that happened.

He also defended the main character, the ugly hunchback Triboulet: “A hunchback that sings – someone says – and why not? I find this character simply beautiful, with his ridiculous external deformity and his internal remarkable love for his daughter”. 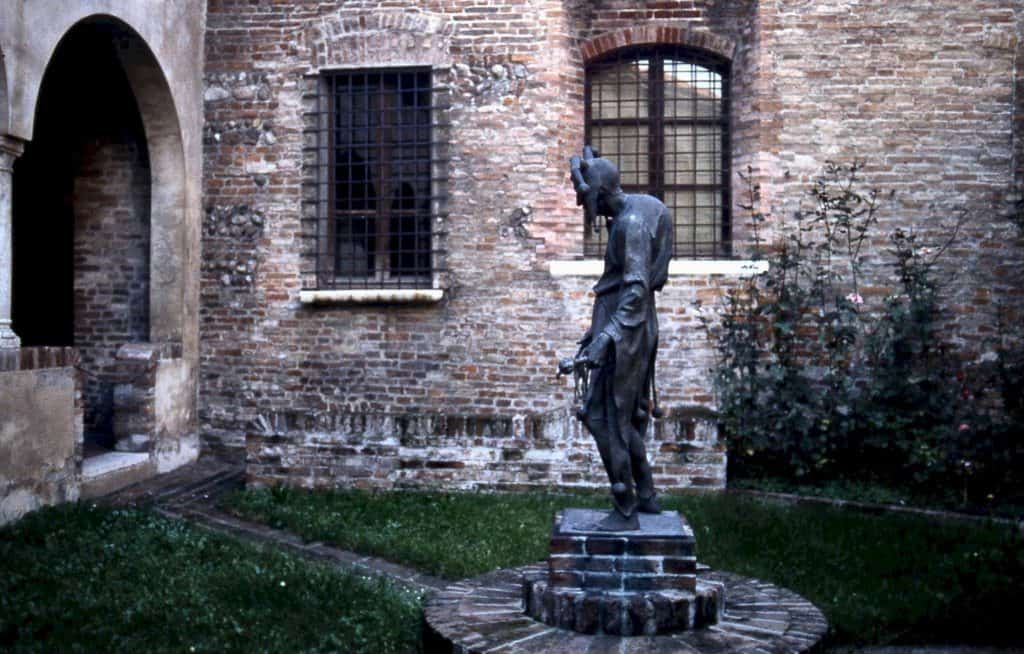 The composer stood up firmly to maintain the curse: “so terrible and sublime in the original […] it’d become laughable if Monterone didn’t address boldly the king […] what meaning would the drama have without this curse? […] I chose this subject precisely for these qualities and its originality. If you change and take them away I, quite simply, won’t be able to set the story to music”.

Verdi’s reasons were clear and his rhetoric powerful. The censors ended allowing most of the things they’d already rejected.

Verdi spent most of January and February to compose and orchestrate the score. The premiere held at La Fenice theatre on the 11th of March 1851 was a huge success.

How does Manua fit the necessity of the drama?

This video introducing the event – which is now a DVD – broadcasted live in 2010 in 148 countries Rigoletto in the places of Rigoletto, directed by Marco Bellocchio, produced by Vittorio Storaro – Oscar for Apocalypse now – and conducted by Zubin Metha – with Placido Domingo starring as Rigoletto – can give an idea of the city as a setting for Rigoletto‘s story.

The choice of Mantua, an ideal Renaissance city, has indeed proved to be incredibly happy if we only consider the cinematographic rendering of the opera. Obviously, the preferred locations have often been two of the best-known landmarks of the city: Palazzo Ducale with its frescoes by Mantegna and Palazzo Te.

Palazzo Te, the most famous creation of the great architect Giulio Romano, was built between 1525 and 1534 for Federico II of Gonzaga as a place, away from the court etiquette of the ducal palace, where the duke could devote time to his lover Isabella Boschetti and other pleasures, including sumptuous evening banquets.

In this magnificent building made to reflect the exquisite tastes of the court, every fresco refers to the pleasure of beauty, love and of the idle life. 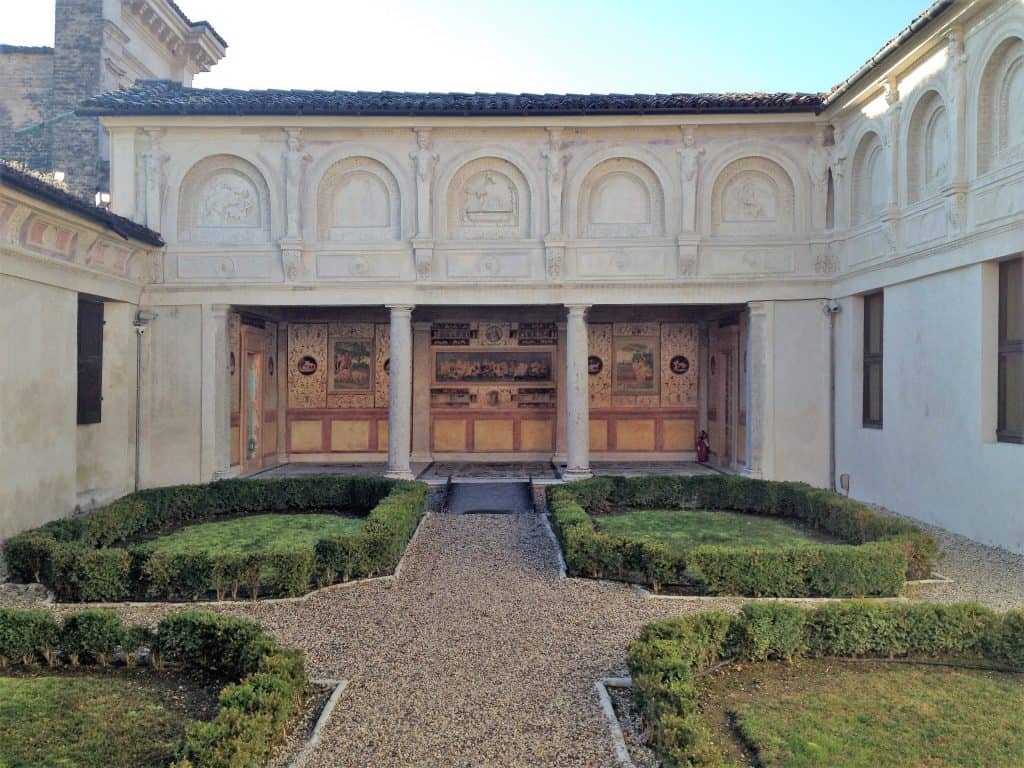 The city of Mantua was already inhabited by the Etruscans and later by the Celts. It then became Roman, giving birth to the famous poet Virgil. Around the year 1000, started the rule of the House of Canossa: Tedaldo and then Countess Matilde expanded their lands and began the construction of churches and convents.

Approximately 200 years later, the rise of one of another powerful family, the Bonacolsi, responsible for the construction of the first core part of the ducal palace. On August 16, 1328, the last of the Bonacolsi dynasty dies by the hand of Luigi Gonzaga, attempting to seize the city with the help of the family Della Scala of Verona. 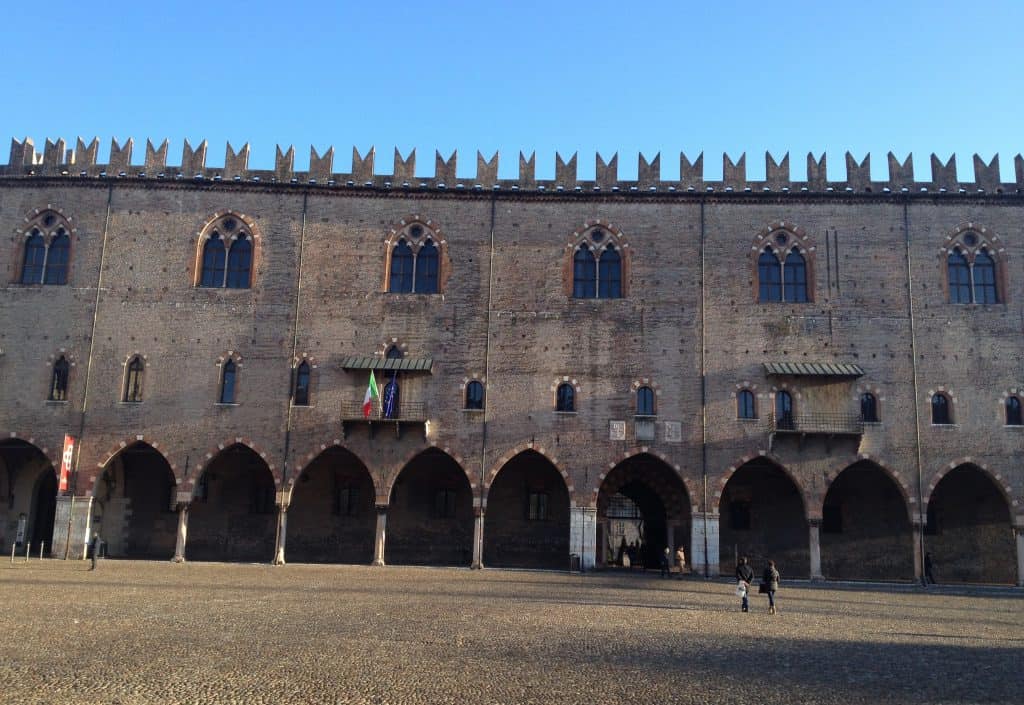 The medieval part of the ducal palace, Mantua

And so the multi-century domination of the Gonzaga family, which ruled on Mantua until 1707, started. This was the most important period in Mantua history. The city became one of the most prominent cities and artistic centers in Europe. Opera itself, as an entertainment and an art form, was first performed at the Manua court.

Great renaissance artists such as Pisanello, Leon Battista Alberti, Andrea Mantegna, Giulio Romano and Luca Fancelli, left some of their most remarkable works in the city which today is, with the nearby Sabbioneta, a Unesco site.

The three artificial lakes created by the river Mincio looping around the center, give Mantua its entirely peculiar layout. It almost looks like a magical city arising from the water. The city and its surroundings since 1984 are part of a natural park hosting an incredible variety of flora and fauna.