Roberto Bachi was a boy like any other. Born in Turin in 1929 he moved with his family to Ravenna in 1937, when his father Alberto – an army general – was transferred there.

In Ravenna, as all kids do, Roberto attended a primary school, the Mordani school. He was on his fourth year in 1937-1938. 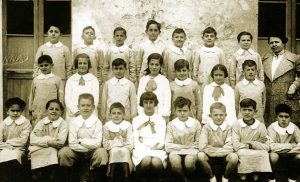 But in the summer 1938 everything changed: the racial laws came into effect in Italy.

Roberto stopped going to school while his father was forced to resign from the army. The Bachi family tried in vain to escape the persecution, moving first to Parma and then to Torrechiara.

On October 16, 1943 Roberto and his father were imprisoned in Milan. Two months later the 6th of December they were loaded like cattle in the same coach with other 64 people and left from the infamous platform 21 of Milan train station for a one way journey.

Roberto’s journey on the train to Auschwitz

They traveled for 7 days, 6 nights and 5 hours until the train reached its final destination: Auschwitz. They were never to come back.

Roberto’s mother Ines never stopped searching for him. After the end of the war she finally discovered that her son, numbered 167973, had died a year after the deportation, probably of tuberculosis. He was 15.

Roberto was believed sick for a long time by his classmates, until he was eventually forgotten. Months and years passed until one of them, Silvano Rossetti, discovered a little plate in Ravenna bearing Roberto’s name. That plate brought back the distant memory of his old classmate Roberto.

Silvano went home and found in a tin box an old picture and a letter with sweet and friendly words addressed to him, written by Roberto. 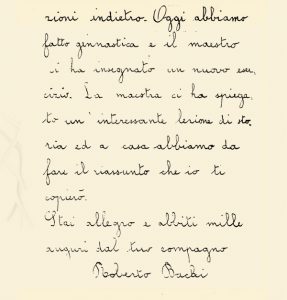 Roberto’s letter to his classmate Silvano

An old sheet and a photo emerging from the past were enough to bring the memory of Roberto back. Piece by piece details of Roberto’s life came back into light thanks to the efforts of Silvano Rossetti and two other old mates of Roberto’s, Danilo Naglia and Sergio Squarzina and with the invaluable contribution and support from the Mordani school Principal Giorgio Gaudenzi.

“Only a conscious past can positively shape the future”

Many events and lectures have been organized since then in Ravenna, with the purpose of preserving Roberto’s memory. However Gaudenzi wanted something enduring linking Roberto’s story with the Mordani school; His motto was: “Only a conscious past can positively shape the future”.

With that in mind he came up with the idea of commissioning nothing less than an opera. The school had an excellent school choir, which obviously could be involved in the project.

If Roberto’s story is now a lyric opera is thanks to composer Paolo Marzocchi and librettist Guido Barbieri, who loved the project since its first inception. 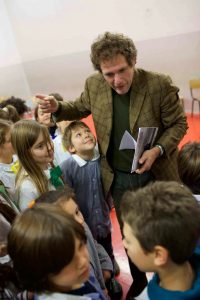 Paolo Marzocchi was contacted for his experience working with children – he lead several projects involving children, particularly in Lampedusa, the island at the south of Sicily which has witnessed in recent years mass arrival of migrants from Africa -.

For the libretto, Marzocchi contacted Guido Barbieri, a journalist and respected music critic at the Italian national radio broadcaster – radiotre suite – for his wide knowledge of that historical period and of fascism and Nazi deportations.

We decided to focus exclusively on Roberto’s journey by train 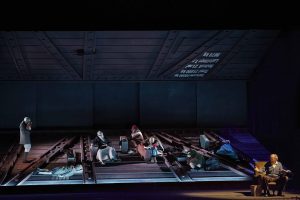 The whole Opera therefore takes place inside the railroad-car and is developed on three different narrative levels, intersecting and alternating. Those of: the mother, the survivor and Roberto himself”.

Barbieri pulled together real facts, building up, if not a true, a certainly realistic story and making of it the epitome of the deportation journey.

“Roberto doesn’t sing so his part is played by a mime. His thoughts are expressed by a quartet of adult voices (2 female and 2 male). 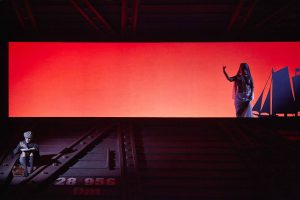 To keep his sanity and not go mad, from time to time Roberto takes refuge in a fantasy world, populated by the characters of great children’s classics such as those in Salgari’s and Kipling’s novels.

These characters, who sing operatically, are mixed with Roberto’s real life ones as that of his father or the schoolteacher. These light hearted and imaginative moments give a lift to this sad and dramatic story”. 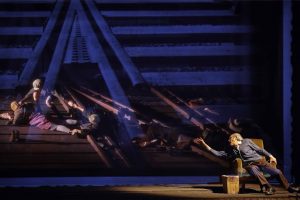 The work is a hybrid between melologue (the mother for instance has more spoken more than sung parts) and an opera.

One of the most important themes of the whole opera was taken from Roberto’s serial number in Auschwitz – 167973 .

“I translated the number into notes following the principles of gematria – a Kabbalistic method of interpreting the Hebrew scriptures by computing the numerical value of words, based on those of their constituent letters, which can be used also to translate numbers into music.

“Sounds a bit weird I know” says Marzocchi “but I realized that the notes resulting from that number worked very well. Therefore I decided to use them a number of times throughout the opera”.

An opera on the memory and about memory

This is not solely an Opera about memory; I wanted it to be a work on the memory. For that reason I’ve quoted famous pieces from the classical repertoire. For instance I’ve cited a Bach chorale – Es ist genug – that begins with the same notes of the sequence originating from the serial number.

Berg recalled the same theme in his violin concerto.

At some point of the opera a woman dies on the train. I outlined that moment with an extract from“Tu tu piccolo Iddio” an aria of Puccini’s Madama Butterfly, inspired by an early 900 film with soprano Maria Cebotari.

All apparitions are accompanied by the sound of the open strings natural harmonics, to create a sharp and pointed sound, as if it was an invisible web or a delicate crystal made of sound. 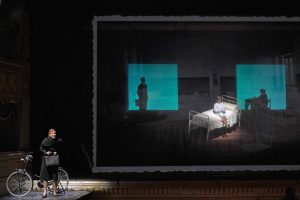 I also included a piece from a French Christmas carol (Roberto was deported in December) and a quotation from the famous tune Va pensiero from Verdi’s Nabucco”.

“The one thing I’m particularly happy about” Marzocchi continues “is I feel I’ve managed to achieve a unity within the opera despite the heterogeneity of the materials I used”.

Telling Roberto’s story in a simple and honest way

“I believe I’ve also succeeded in avoiding the easy rhetoric: I tried to tell Roberto’s story in a simple and honest way, using the language of contemporary music.

Modern music is a language that can be understood very easily, indeed more easily than you might think, even by children or those not familiar with classical music.

For Instance, at Christmas I brought in a primary school of Lampedusa a quartet by Shostakovich and was amazed by the wonderful feedback I got from the kids. I love using the modern music language when writing for children choir: they are fantastic, totally enthusiast performers!

I love working with opera singers

I also love working with opera singers. I especially like the warm voice of contralto. When I write a piece for lyrical voice I have in mind the Italian great opera tradition which I love and therefore use all the features and even embellishments I’ve learned from it.

An audience as wide as possible

When I wrote this opera I didn’t have a specific public in mind. Instead I wanted to convey a message and communicate with an audience as wide as possible. I believe classical music should be accessible to all, regardless of age or musical culture.

Although, you know, it’s up to the public to decide if I succeeded or not” (he laughs). 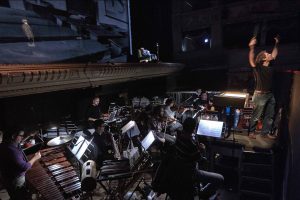 Mr. Marzocchi’s next commitment will be again in Lampedusa, where he will play the piano at the premiere of his reworking of Brahms third concert for piano, for a small orchestra of 15 – the Wundercammer.

The social importance of music

Marzocchi, who is a convinced supporter of the social importance of music, founded this orchestra with the purpose of bringing symphonic music where it’s not possible to bring a large orchestra.

His experience in the movie industry, says, allowed him to develop a special sensitivity for musical theatre. From that experience he learned how music can and should support the narration of a story.

A recording of Roberto’s journey will be made available soon, so… stay tuned!