Franco Alfano’s two symphonies, among the most relevant Italian compositions of the first half of the 20th century as well as Zandonai’s remarkable collection of orchestral and chamber works show that their non-operatic compositions weren’t certainly occasional.

Franco Alfano, as most knows, composed the music for the last 2 scenes of Turandot, Puccini’s last opera left unfinished after the composer’s death in 1924. Puccini had left sketches for the end of the opera, along with instructions to Riccardo Zandonai to finish it, yet, following Puccini’s son objections, to work on the draft and finish the opera, was instead chosen Franco Alfano.

Both Alfano and Zandonai can be defined as “operatic symphonists” : they embodied a new way to define the relationship between music and drama. The drama was no longer described by the music; it was precisely the opposite: the drama provided the frame to the music. This process can be seen at its most in Zandonai’s Francesca where entire acts can be defined as symphonic poems.

Since 1890 Wagner’s scores had spread widely in Italy. The scale and magnificence of the composer’s major works led to their frequent staging, particularly at La Scala, where, between 1890 and 1915, there was at least one Wagnerian production every season. Of all Wagner’s operas it was Tristan the most impressive to the Italian audience. When Pietro Mascagni, newly appointed director of Rome’s Teatro Costanzi, put together the opera program for the season 1909-1910 he chose Tristan and Isolde  for the premiere.

By then Italian composers’ relationship with Wagner was very different from that of the late 1880s and early 1890s, when the German composer was still controversial. For a young composer such as Zandonai, Wagner was part of the “musical landscape” and by 1905 as Mascagni defined it, a powerful reality with which any serious composer had to deal seriously. 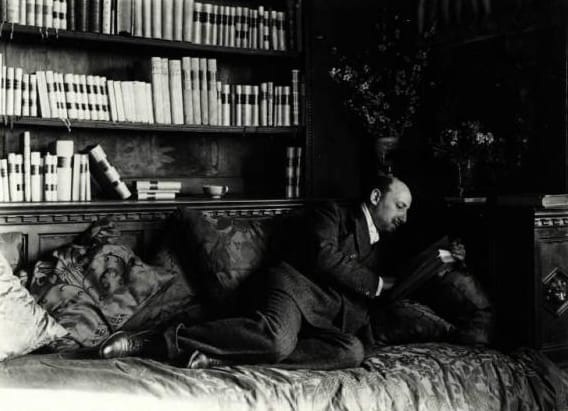 Gabriele D’Annunzio in a picture by Mario Nunes Vais

Mascagni went as far as suggesting that “Italians, given their warm, dramatic and passionate temperament, should chose instead of the Nordic myths that inspired Wagner, human figure that could embody ideals, aspirations sentiments passions and sorrows, to bring to life the modern opera”. The Wagnerian example forced Italian composers to work on new kind of dramas than those used for the so called bourgeois opera.

Main elements of the tradition of bourgeois opera were for instance the strong religious and moral dimensions but they couldn’t be used by this young generation of composers. They instead turned to aestheticism, the doctrine of art for art’s sake, expressed in the cult of beauty and the transformation of ordinary experiences into aesthetic objects.

The aestheticization of opera was also seen, in an age when nationalism was emerging as an important political and cultural force, as a mean to turn opera into an “intrinsically national” art form. Ironically, despite its popularity success and the deep roots into the Italian culture, Verismo which ended coinciding with bourgeois opera, was seen by the ideologues of the new nationalism almost as the anthesis of an authentically national opera. Even Puccini’s music was seen as embodying “all the decadence of today’s Italian music, all its cynical commercialism, all its miserable impotence towards the triumphal vogue of internationalism” as wrote bitterly Fausto Torrefranca.

It is precisely at this point, in the early years of the new century, that D’Annunzio began to occupy a central stage in the Italian operatic life. Although the young generation of composers was familiar with Wagner’s operas, it was through D’Annunzio’s sensibility and vision which mixed rhetoric and cult of the past, nationalism and decadence, that the impact that his works could have on their own compositions became clear.

Wagner’s Tristan and Isolde provides a constant inspiration to D’Annunzio as for Parisina, libretto set in music by Mascagni, L’Amore dei Tre Re, written for Montemezzi and above all Zandonai’s Francesca da Rimini.